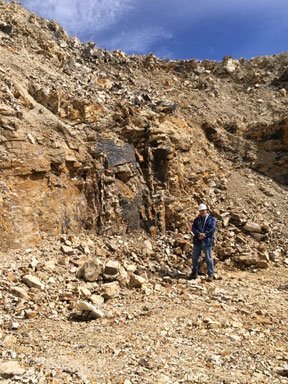 – Back in the late 1800s, hordes of miners descended on Colorado’s Custer County to seek their fortunes. They staked nearly 100 individual claims, and mined large amounts of top-grade silver and gold from the ground. The area even acquired a revealing name: the Hardscrabble Silver District.The mines fell on hard times by the 1920s. But there was plenty of ore left in the ground. When one of the properties in the District, called Silver Cliff, was explored using modern techniques in the 1980s, geologists found some of the highest levels of silver ore ever measured in North America — and estimated that the area contained 40 million to 50 million ounces of silver. That would be worth more than three-quarters of a billion dollars at today’s prices.Still, the Silver Cliff property and others like it remained untapped — until now.A North America-based company called Viscount Mining Corp (TSXV: VML, OTCQB:VLMGF) has realized the potential of both Silver Cliff and a similar historical mining property in Nevada called Cherry Creek. As he explains in a recent interview with Stock-Sector, Viscount CEO Jim MacKenzie did the painstaking work of acquiring the properties. Then he oversaw a new round of geological exploration in which new test holes were paired with the holes drilled in the previous testing at Silver Cliff.The results from this new exploration have now come in — and they are extremely impressive. The data shows up to 67 ounces of silver per ton of ore at Silver Cliff, confirming the great promise shown in the earlier results. Viscount is now planning the next phase of drilling to verify and expand the resource, looking towards full-scale mine operations.Meanwhile, the company is also moving ahead with its Cherry Creek property in Nevada, which includes more than 400 past claims and more than 20 mines that produce silver, gold, and tungsten."With these two valuable mining properties, I think that Viscount Mining Corp. is ideally positioned to take advantage of the long-term demand for — and rising prices of — silver and gold,"says professional geologist Howard Lahti, Ph.D, Viscount’s Vice President of Exploration.
NewsUSA Business

BookTrib’s Bites: Four to Keep You Captivated This Summer