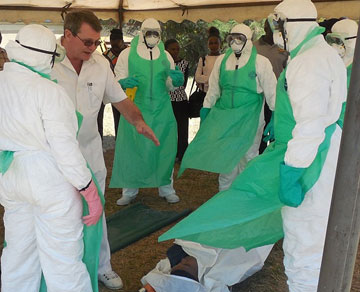 – Scientists have long held that it will not be weapons of mass destruction that kills the human race, but rather a biological one.Case in point: the flu pandemic of 1918, colloquially known as the Spanish flu, occurred during World War I and spread worldwide during 1918-1919. Published research suggests the final death toll may have been as high as 100 million.Despite decades of developments in biology and virology at the cost of more than $80 billion, the U.S. is unprepared to handle a flu pandemic of a similar scale if one should occur, contends Dr. Steven Hatfill, a specialist physician and virologist with additional training in medical biochemistry, and experimental pathology.After more than a decade of study, Dr. Hatfill and his team have published a book, Three Seconds Until Midnight, in which he revisits the challenges of the 1918 pandemic and highlights the limitations of the current public health system in the U.S. in the event of a serious pandemic on the scale of the 1918 event."There are worse viruses out there in nature than another 1918-type pandemic. They are simply waiting for the right conditions to jump into man," says Dr. Hatfill.In addition, "the overwhelming majority of Americans assume that the CDC and public health authorities are capable of rapidly detecting when a new outbreak of infectious disease is occurring and that they will quickly respond with a vaccine, drugs, and other measures to contain the event. In reality, none of this is true with respect to a serious pandemic," he emphasizes.In the book, Dr. Hatfill and his team point out how the U.S. has an insufficient public health workforce and lacks the "surge" medical capacity needed for a pandemic situation with mass casualties, and that no programs are currently in place to train personnel how to handle a pandemic.Vaccine distribution is another problem, says Dr. Hatfill. Department of Health and Human Services (DHHS) documents show that in a pandemic on the scale of the 1918 event, a minimum of 123 to 125 million Americans will not receive any anti-viral drugs or vaccine until at or near the peak period of infection and death. Historically, the poor, socially disadvantaged urban communities will be hit the hardest.Citizens are uninformed on how to care for family members at home if they contract a contagious and possibly lethal infection, and entire households can become ill, Dr. Hatfill says.Dr. Hatfill’s book outlines how the government can salvage its preparedness plan by considering more involvement by the military in a disaster response mode, similar to the role played by the Armed Forces after Hurricane Katrina in 2005.The major problems in pandemic preparedness occur not with the federal government but with the local city authorities who continue to be unprepared to manage an outbreak of a serious lethal infectious disease on a 1918-type scale. This includes having rational methods to manage worker absenteeism, organizing alternate care sites, expanding mortuary capabilities and teaching non-pharmaceutical interventions to the public."We now live under population densities that are a new phenomenon in human civilization and we have no precedent to indicate if we are nearing a threshold or not". As a consequence, every individual alive today is participating in a great on-going global biological experiment," says Dr. Hatfill.Three Seconds Until Midnight will be available for purchase online via Amazon or Kindle in approximately mid-October. For more information, visit www.ThreeSecondsUntilMidnight.com.