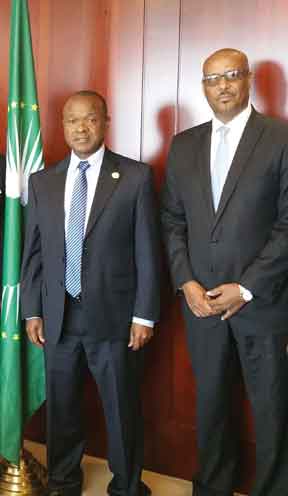 – A small Virginia business that will help create manufacturing jobs in U.S and energy development in Ethiopia praised President Trump for his support of the Export-Import (EXIM) Bank of the US as a job-creating and export tool."Thanks to President Trump for his support of the Export-Import Bank of the U.S. We are on track to create a 1,200 megawatt wind energy project in Ethiopia that is expected to create up to 5,000 U.S. manufacturing jobs producing turbines for export," says Paul Delkaso, President and CEO of Tristar and Tritente Global Energy Group."EXIM is not just about help-ing large companies like Boeing" Delkaso adds. "It is all about help-ing small- and mid-sized U.S. firms, making America Great Again and bringing security, eco-nomic development and jobs to the African continent.""Exporting American electricity technology will create jobs in the U.S. while demonstrating American leadership in a growing market. Electricity will generate jobs, and improve security and healthcare while stimulating benign economic development."Tristar and its sister company, Tritente Global Energy Group, is working with Détente Group of Virginia, EXIM Bank and leaders in Africa to bring energy security to Africa, where 620 million people lack electricity."Every industrialized country has an EXIM-type of program to stimulate exports," says Brien Morgan, Managing Partner of Détente Group, which has been working with Tristar and the US EXIM Bank to finalize funding."Under President Trump’s Administration and Rep. Scott Garrett’s leadership, Détente looks forward to working with an invigorated US EXIM Bank to deploy its Ethiopian wind farm project along with other US high-tech job-creating projects."The Hon. Mr. Erastus Mwencha, Deputy Chairperson of the African Union Commission, met with the Tritente Global Energy Group team and says that, "Africa is undergoing a sustained period of economic growth and transformation. In order to be sustained, this growth will need to be fueled by a massive investment in energy.""The vision of Tristar and Tritente Global Energy Group in sub-Saharan Africa must be supported and admirable," adds Mwencha.Tristar is also working with several African nations on a new round of infrastructure projects, including rail, port and clean coal, Delkaso says.However, the EXIM support of Detente’s $ 3.6 billion is the best way to create U.S. manufacturing jobs and to boost exports.
NewsUSA Career

Bet on Veterans for Manufacturing Jobs

Financial Planners Reflect on Barriers, Opportunities in the Profession