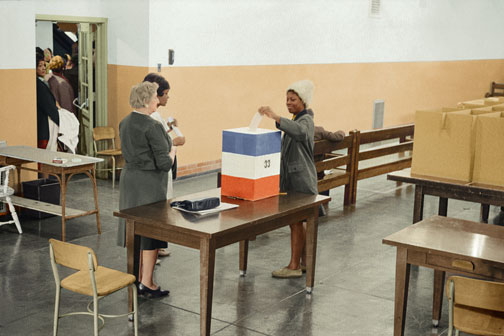 – Think this election season has been the craziest of all time? Think again. American elections have long been highlighted by drama, scandal and intrigue — and the surprising twists and turns of presidential campaigns have a habit of repeating themselves.Several aspects of the 2020 election cycle have undoubtedly been unique, with a global pandemic, protests for racial justice and extremist groups threatening violence. But from the civil rights movement to the Great Recession, Americans have previously headed to the polls through war, economic downturn and social instability. As the dust settles after this election, it’s worth looking back to the past for a bit of historical context."In this crazy year, the best way to figure out what will happen to the country after everything settles down again is to understand our history," says Carlos Watson, Emmy-winning journalist, entrepreneur, political commentator, CEO of OZY and host of The Campaigns That Made History, a two-hour documentary that recently aired on HISTORY, covering the most surprising and shocking political contests of the past. For fans who have been following the burgeoning partnership between OZY, which seems to be the definition of media’s omni-channel future, and A+E Networks, which owns networks including HISTORY and Lifetime, the documentary was a rare treat that meets the moment, allowing viewers to jump several steps ahead of the curve this election cycle."This isn’t the first crazy election we’ve had — there have been five of these whoppers just over the past 60 years," said Watson, who has become one of the preeminent new media figures helping the public make sense of this moment in history — perhaps the next Doris Kearns Goodwin. Here are a few lessons from just three of those "whoppers" to help you contextualize the most recent election.1. Anti-establishment candidates aren’t just a 21st century problemWhen Ronald Reagan, a former football player and charismatic actor, challenged President Gerald Ford in 1976, he wasn’t afraid of abandoning boring political-speak. "Balancing the budget," as he quipped to Johnny Carson on The Tonight Show, "is like protecting your virtue: You have to learn how to say ‘no.’" The California governor came tantalizingly close to defeating the sitting president. And while Reagan lost, Ford urged him to address the Republican National Convention anyway, assuming he would embarrass himself without a teleprompter. That was a mistake: Reagan delivered a stirring speech, putting him on the path to the presidency four years later.2. How a contested election could play out"Florida, Florida, Florida." NBC’s Tim Russert’s election night mantra in 2000 would play out over weeks as the election outcome hung in the balance, and lawyers and activists descended on Florida for a disputed recount. In the end, the U.S. Supreme Court’s 5-4 decision in Bush v. Gore overruled the state of Florida, halting a recount and giving Bush the win more than a month after Election Day.3. The Proud Boys of 1968A tumultuous year marked by racial unrest and assassinations of leaders Martin Luther King Jr. and presidential front-runner Robert F. Kennedy ended up with Republican Richard Nixon topping Democrat Hubert Humphrey. But segregationist George Wallace’s third-party campaign, representing Southerners who had ditched the pro-civil-rights Democratic Party, was a shock to the system and a sign of things to come. "In 1968, the equivalent of the Proud Boys wasn’t just some crazy group on the edge — they were on the ballot, got 10 million votes and won five states," says Watson.After more great insights from history? Catch up on The Campaigns That Made History, from OZY and HISTORY, on history.com.

BookTrib’s Bites: Intriguing Stories and A Better You

Marine Toys for Tots Provides Books to Title I Schools