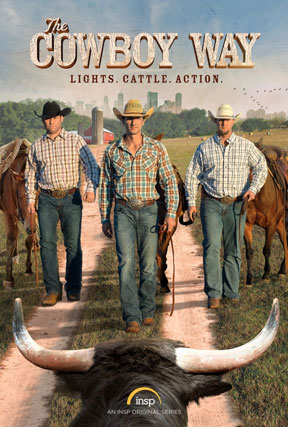 – Much of cowboy culture focuses on the more glamorous aspects of riding across the range into the sunset. While the lives of real cowboys in America today retain some of those romantic elements, there’s plenty of daily drama and struggle, as well as friendship and fun.A new series on family-entertainment television network INSP showcases the lives of three cowboys in Alabama who are maintaining the common cowboy code while trying to make a living building a cattle business in South Alabama.Today’s cowboys have to cope with long hours, injuries, and uncertain income, but the three men featured in The Cowboy Way: Alabama wouldn’t want it any other way.Their co-ownership of the Faith Cattle Company is based on unconditional support as well as a work-hard-play-hard philosophy.The show airs in August, and has already been given the green light for a second season, notes Doug Butts, INSP’s Senior Vice President of Programming, in a statement."During post-production, it became clear to everyone that we’ve got a great show on our hands," he says. "These cowboys are the real deal: down-to-earth, likable and very entertaining. They are a band of brothers, and audiences will love them," he adds.Bubba Thompson, a skilled carpenter, brings his charm, integrity, and strong work ethic to his cowboy life. Some TV viewers first met him as a runner-up on a southern-style dating show, although he has since relinquished his bachelor status and is happily married.Cody Harris is a cowboy with a history on the rodeo circuit, where he won several championships in calf roping. Now retired from rodeo competition, he makes room in his cowboy life for work as a rodeo producer, father, and husband to a champion barrel racer.Chris "Booger" Brown grew up on his family’s farm, and has spent his life as a rancher. The series also highlights his skill as a horseman and a horse trainer, as well as his sense of humor which helps get him and his friends through the tough days of herding cattle and working fields.The Cowboy Way: Alabama airs on Thursdays, at 8:00 p.m., Eastern, on INSP.For more information, visit www.thecowboywaytv.com.

Toys for Tots Youth Ambassadors Take the Lead in Serving Others