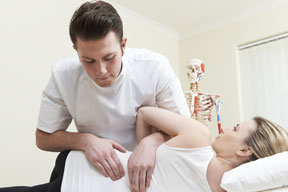 – Is it time to finally put this one to rest?
Every once in a while, when some high-profile young man or woman dies unexpectedly from a stroke, the media races to find an explanation. Aha! She ran a marathon without being in shape! Aha! He visited a chiropractor several days before to relieve a pinched nerve in his neck!
The latter theory at least is refuted by research done this year by a team of neurosurgeons at the Penn State Hershey Medical Center. They performed what they described as “a systematic review and meta-analysis of published data” to determine whether there’s a direct correlation between the manipulation performed by doctors of chiropractic — manual adjustments widely acknowledged to relieve muscle-related pain — and a condition called cervical artery dissection (CAD) in which a small tear opens in the artery walls of the neck.
That’s important since such a tear can result in a stroke should a blood clot form and later break free to block a blood vessel in the brain.
The team’s conclusion? “There is no convincing evidence to support a causal link between chiropractic manipulation and CAD.”
CAD is actually quite rare. It’s been estimated that it annually strikes only two to three people, per 100,000 of the population, and various epidemiologic studies through the years suggest that strokes can occur at an equal rate whether sufferers are under chiropractic or other medical care for the headaches and neck pain it often produces.
As for chiropractic care in general, it’s worth remembering that — after the Centers for Disease Control and Prevention urged doctors last March to avoid prescribing potentially addictive prescription painkillers in the face of mounting deaths — a slew of health experts joined the chorus of those who’d already been praising chiropractic as a safe and effective treatment for neck, mid back, and lower back pain.
“Not only is chiropractic care very safe, it actually poses fewer risks than medical or surgical treatment,” says Gerard Clum, DC, a spokesperson for the not-for-profit Foundation for Chiropractic Progress.

Toys For Tots and The UPS Store Build Bridges With Books

What New Year's Resolution Do You Really Want to Stick To?

Leave Your Footprint on The Fight Against Childhood?Cancer

Championing the Right to Age Well