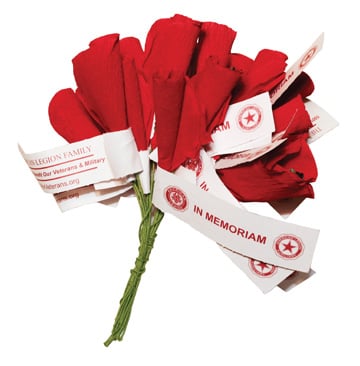 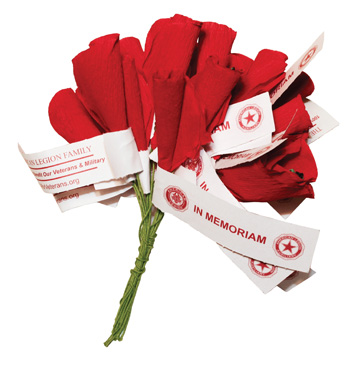 -Memorial Day is approaching, and this year there is something simple that everyone can do to honor past and present military personnel — wear or display a red poppy.The simple red poppy flower has symbolized military sacrifice since World War I, but National Poppy Day (the Friday before Memorial Day) got its start in 2017 by an act of Congress.The choice of the poppy was inspired by the poem, "In Flanders Fields," written by Lieutenant Colonel John McCrae, M.D. while serving on the front line in World War I in Europe. Since then, the poppy has become a symbol to raise awareness and recognize the sacrifices of military personnel and their families.The American Legion, the nation’s largest veterans service organization that includes nearly 2 million members worldwide, adopted the poppy as the official memorial flower in 1920, and began a national poppy distribution program associated with Memorial Day in 1924."National Poppy Day is a time to honor every member of the Armed Forces who died in the name of liberty, freedom and democracy," says James W. Oxford, national commander of The American Legion."Wearing this symbolic red flower shows your support of veterans for generations to come."Everyone can participate in National Poppy Day. Wear a poppy or a poppy-themed item, such as a pin, t-shirt, bracelet or a poppy sticker, and tell people what it means. Share poppies with friends, family and colleagues. Accept a poppy and make a donation if you see members of The American Legion Family distributing poppies."Each year, members of the American Legion Family, led by the American Legion Auxiliary, distribute poppies with a request for a donation," says Nicole Clapp, national president of The American Legion Auxiliary."All donations received are then used by The American Legion Family to support the future of local veterans, active-duty military personnel and their families with medical and financial needs."This year, National Poppy Day takes place on Friday, May 28.For those on social media, share your military stories or poppy photos, and use the hashtag, #PoppyDay #LegionFamily.Visit poppydayusa.org for more information about National Poppy Day, to purchase poppy-themed items, or to donate to The American Legion.

Cleaning Out the Medicine Cabinet Keeps Others Safe