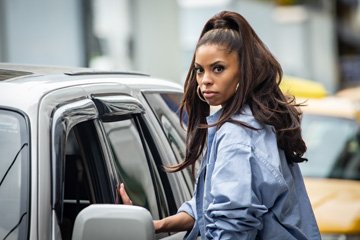 – Warm up with Lifetime’s winter slate of hot stories featuring several of pop culture’s most iconic women: Salt-N-Pepa, Wendy Williams, and Whitney Houston.The programming kicks off on January 23 at 8 pm ET/PT with "Salt-N-Pepa," a three-hour Lifetime original movie about the groundbreaking hip-hop duo, starting with their days as students at Queensborough Community College and their first recording experiences.The story details the duo’s unprecedented success as the first female rap group to go platinum, and features several of the duo’s hits, including "Let’s Talk About Sex," "What a Man," "Shoop," and "Push It."The movie also explores Salt-N-Pepa’s impact on hip-hop culture, with their frank lyrics about men and sex that paved the way for future female rappers. The movie stars GG Townson as Cheryl "Salt" James and Laila Odom as Sandra "Pepa" Denton.Following the movie, the Emmy® and NAACP award-winning Loni Love hosts a documentary, "Let’s Talk About Salt-N-Pepa," featuring exclusive interviews with Salt and Pepa about what makes their partnership work, and their ongoing influence on the music world.Next up, on January 30, "Wendy Williams: The Movie" airs as the first biopic about Wendy Williams, outspoken television host and self-proclaimed "Queen of all Media."Executive produced by Wendy Williams, the movie tells the story of her career path from her early days as an urban radio host and how she overcame obstacles both personal and professional to achieve her goal of having her own syndicated talk show. Despite all the naysayers and obstacles Wendy encountered throughout her life, her strength and determination have allowed her to thrive. Ciera Payton plays Wendy Williams, joined by Morocco Omari as Wendy’s ex-husband, Kevin Hunter.The film is followed by the documentar "Wendy Williams: What a Mess!" in which Ms. Williams gives a raw and emotional interview.Finally, "Whitney Houston & Bobbi Kristina: Didn’t We Almost Have it All," a two-hour documentary scheduled for February 6, explores the emotional story of Whitney Houston and her daughter, Bobbi Kristina, and their parallel stories, including the pressures of life in the spotlight and struggles with drugs and alcohol.The program includes conversations with friends and family for a candid look at the ups and downs of the lives of this famous mother and daughter.Visit mylifetime.com for more about Lifetime’s winter programming and other events.