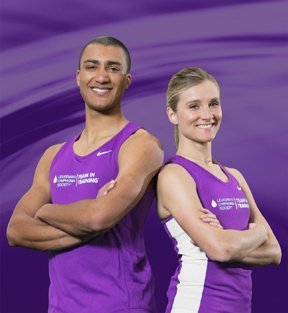 – Olympic track and field stars, Ashton Eaton and his wife, Brianne Theisen-Eaton, have joined The Leukemia & Lymphoma Society’s (LLS) Team In Training as National Ambassadors. The power couple will support this iconic endurance sports training program in its quest to cure blood cancers, the third leading cause of cancer deaths in the U.S. Fresh off of their medal-winning Olympics in Rio de Janeiro last summer, the Eatons announced their retirement in January, looking for their next challenge. For their entire professional career, they have competed for different teams — Ashton for the United States, Brianne for Canada — but now they will be joining the same team, Team In Training (TNT). LLS invented the concept of sports endurance training for charity with the 1988 NYC Marathon. Since then, Team In Training has raised more than $ 1.5 billion for research and patient support, trained more than 650,000 people, and helped LLS invest more than $ 1 billion in research to advance breakthrough cancer treatments. The Eatons will be raising awareness for Team In Training’s new Offerings. No longer just marathons, Team In Training’s portfolio now includes high profile cycling, hiking and climbing events, including teams training to climb Mount Kilimanjaro. All events offer the program’s mainstay coaching, community support and camaraderie, and a new, innovative training app, to take teammates from training to finish line. As Team In Training gears up for its 30th anniversary, the Eatons will be raising awareness for the work LLS does to find cancer cures by advancing cutting-edge research, funded in part through Team In Training. Ashton Eaton, a two-time gold medal winner in the Decathlon, regarded as the “World’s Greatest Athlete,” says, “Team In Training is the perfect fit for Brianne and me. Our careers have been about chasing personal goals that might seem impossible, while representing something bigger than ourselves. We couldn’t be prouder to come on board.” Brianne Eaton, a bronze medalist in the Heptathlon, adds, “We strive to provide inspiration and encouragement to Team In Training teammates and coaches, to promote personal mastery while raising funds for LLS’s mission — to find cures and ensure access to treatments for blood cancer patients.” “Ashton and Brianne are set to start energizing Team In Training teammates across the country and the world,” says LLS’s CEO, Dr. Louis J. DeGennaro. “Their involvement will help us create significant awareness for LLS as we raise much-needed funds for research and patient support to make someday today for blood cancer patients.” So join the Team! For more information on Team In Training, visit www.teamintraining.org.
NewsUSA Health

Holiday Hosting: The Ultimate Survival Guide for the Season

Five Ways to Make the Most of Your Prescription Drug Plan