For those who relish the blurring lines between reality and existences lurking beyond, the recently released epic book “KALEIDOSCOPIC SHADES: WITHIN BLACK ETERNITY” by David A. Neuman catapults readers into such unknowns.

At 566 pages, the book is a doorstopper of a novel that fans of sci-fi and paranormal thrillers can really sink their teeth into. It’s a homage to “The Twilight Zone” overlaid with “Alice in Wonderland,” with its own soundtrack, including Satchmo trumpeting, classic rock, a twisted version of “Somewhere Over the Rainbow” and always the eerie, persistent sound of tinkling bells.

The book has been described by Editor Jason Pettus as “part Stephen King, part David Mitchell, part David Lynch … with [an] emphasis on wry humor and clever wordplay.”

It seems fitting that the author himself calls the novel an “adventure of escapism,” explaining, “The world has become a pressure cooker. If I can be a release-valve, and those who choose to go along for the ride come back in one piece and invigorated, albeit a little rattled, then it has been worth the risk.”

In the story, 11 years following a cataclysmic event that ripped apart the state of South Australia, the Triplow family has finally found peace. Settling in California has ensured that the past horrors and madness of Hastings remain relegated to another time, another place.

But that false perception is quickly shattered when Bob Triplow is forced to face those things buried deep within himself.

Having to accept what no parent would ever wish upon his child, he will take his son on a journey to his past and the horrors of his childhood — a place well beyond Hastings…well beyond South Australia … a place truly out of this world, where life is manipulated with brutal destructiveness.

Within this dark, boundless dimension, surrounded by the ghosts of all that has gone before, Bob will learn that past events always find a way of catching up — and that somehow, these events are intimately connected to Earth’s impending loss.

In a final confrontation, life’s fragility will be displayed with gruesome clarity, and Bob will struggle for his own sanity and while his ten-year-old son will be compelled to make decisions upon which six billion lives depend.

Readers will discover that the paranormal is never far from the surface of modern-day life, and that what lies in the darkness knows more about you than you ever dared to imagine. 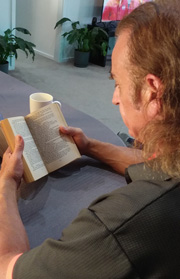 The author’s fascination with the paranormal began when he was barely a teenager. Having worked from an allied health background, where he assisted thousands over the decades to rediscover their physical selves, Neuman now wishes to transport people into a world beyond the physical, a reality that can nonetheless be seen and touched.

“An intriguing, engaging and articulately written book,” says Gina Skoumbros. “It builds in intensity and gripping suspense and makes you question whether unthinkable events could actually be possible. If this were a movie, my nerves wouldn’t last.”

OnLineBookClub.org calls it “an exciting work of paranormal fiction. It takes you into a world where anything and everything is possible.”

NOTE: BookBites is presented by BookTrib.com.

Show That You Care Even When You Can’t Be There

BookTrib’s Bites: Captivating Stories and a Bit of Self-Help

Why Eco-Warriors Will Love or Hate You, Depending On Where Your Hair is Done