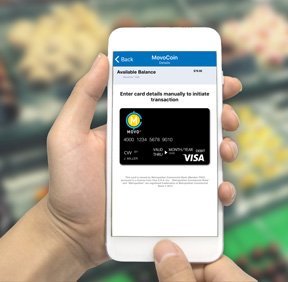 – This fall, like clockwork, Apple, Inc. will launch its iPhone 8, with yet another new operating system. Added to the mix will be the launch of Apple Pay Cash and sending money inside its messenger app, also known as Peer to Peer (P2P). The problem is that millions of Apple and Android users won’t be able to use it. The reason is that you must have an iPhone 6 or higher to be compatible with iOS11, which means that of the more than 90 million iPhone users in the United States, approximately 55 million will not have access to Apple Pay Cash and P2P. This gap in service by two of the largest technology companies in the world could send all of the excluded iPhone and Android users to seek an alternative way to send money and have it loaded to a card. Enter MovoCash, the brainchild of Eric Solis, which has created a payment platform that allows consumers to link their bank accounts to their MovoCash account for mobile payments with no limitation on the number of supported banks. Unlike Apple Pay or Android Pay, MovoCash eliminates the need for retailers to buy expensive equipment. “MovoCash is a transformative way to think about payments,” says Eric Solis, CEO and founder of the company. “It always bugged me that companies like Apple would roll out a product that is so hard to use. You have to have a newer iPhone, you have to have a card that supports Apple Pay, you have to go to a merchant that supports Apple Pay. At the end of the day, so many consumers are locked out of the digital economy. We fixed all of that with MovoCash,” says Eric Solis, founder of the company. To that point, MovoCash allows users (and even non-users) to send money to a friend instantly. And that friend can then turn around and buy a latte. Some of the many advantages of Movocash compared to Apple Pay are that: * Apple Pay can only be used by iPhone owners. With Movo- Cash, you can send money to anyone who has a smart phone. * Only about 1 in 3 retailers support Apple Pay, while MovoCash is supported by more than 99.9 percent of retailers. * Apple Pay can be spent where Apple Pay is accepted (usually not online) or sent to your bank. MovoCash, on the other hand, can be spent at nearly 100 percent of merchants. You can also get cash at an ATM, cash back with a purchase, pay bills, send someone a check, or shop online. Consider this: according to Gartner, Inc., an American research and advisory firm providing information technology-related insight, of the 431 million smart phones sold worldwide in 2016, 352 million were Android devices and 77 million were iPhones. This is important because MovoCash has plans to expand globally. As for the domestic market, there are 107 million Android smart phones in the United States and 90 million iPhones, of which 55 million are iPhone 5 or older. This means that a total of 142 million smart phone users in the United States will be blocked from using Apple Pay Cash. Alternatively, MovoCash works across all devices and has plans for global expansion. “We are thrilled with the capabilities created with MovoCash,” says Solis. “Our technology is available now and has many more features that make managing your money much easier than any other tool on the market.” For more information, visit https://movo.cash/.
NewsUSA Money