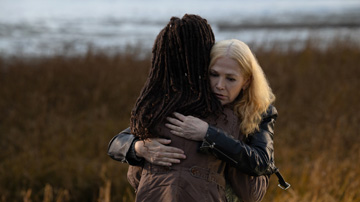 – Nothing beats the midwinter blahs like a juicy true crime movie, and the Lifetime television network delivers with a quintet of original movies as part of its popular "Ripped from the Headlines" series premiering this February/March, including three movies featuring Law & Order alumni.Following on the heels of the February 13 premiere of "Death Saved My Life," starring Meagan Good, Lifetime launches an original movie each week for the next four weeks.The February 20 premiere of "The Long Island Serial Killer: A Mother’s Hunt for Justice," starring Kim Delaney, has added significance as Lifetime’s 400th original movie. The plot follows a mother’s quest for the truth about her daughter who disappeared yields gruesome evidence of a possible serial killer who has never been identified."As the leading producer of original movies, it’s truly exciting to hit 400 this February," says Tanya Lopez, executive vice president of scripted content for Lifetime and LMN."This milestone speaks to the incredible power and longevity of Lifetime Original Movies in the television landscape, and I am thrilled to unveil even more movies in 2021," she adds."Girl in the Basement" premieres on February 27 and stars Judd Nelson, Joely Fisher, and Stefanie Scott in the horrifying story of a teenage girl imprisoned by her father in the family basement, where she is subjected to years of rape and torture while her mother and sister believe she has run away.The next two movies, "Circle of Deception," airing on March 6, and "A House on Fire," airing on March 13, are inspired by the work of popular true crime writer Ann Rule."Circle of Deception" stars Diane Neal as a former beauty queen caught in the intrigue when her best friend’s husband turns up dead."A House on Fire" features Stephanie March as a doctor with a seemingly picture-perfect life who hides a rocky marriage and a toxic relationship with pills and alcohol.All four films feature women in key production roles as part of Lifetime’s Broader Focus initiative.Actresses Elisabeth Rohm and Ashley Williams make their directorial debuts with "Girl in the Basement" and "Circle of Deception;" Shamim Sarif directs "A House on Fire," and Emmy-winning journalist Deborah Norville serves as an executive producer for "The Long Island Serial Killer: A Mother’s Hunt for Justice."Each movie debut is followed by a short documentary with more context about the real-life stories that inspired each feature.Visit mylifetime.com for more information.