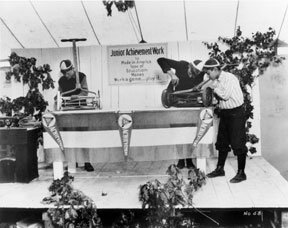 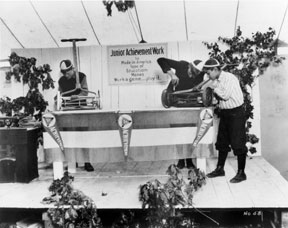 – Ask any young person what they want to be when they grow up and you most likely will get lofty answers, such as a pro-football player or a You Tube star. While admirable, it may be worthwhile to temper these expectations and get kids thinking about a Plan B that incorporates their dreams into the real world.Enter Junior Achievement (JA), a non-profit organization that is celebrating its 100th anniversary.Since 1919, JA has made it its mission to prepare youth for future jobs by helping young people understand business and finance so that they are "work-force ready."Currently, the JA network reaches approximately 5 million students a year in the United States, and 10 million students in total in more than 100 countries.To understand its current mission, we have to look at the organization’s history, which began as the Boys’ and Girls’ Bureau of the Eastern States League, founded by AT&T chairman Theodore Vail, Strathmore Paper Company founder Horace Moses, and Massachusetts Senator Murray Crane.Today, JA aims to educate youth with the knowledge and skills to achieve economic success in a variety of ways, whether that means going to college, starting a business, or learning a trade. JA programs are taught by volunteers whose goal is to help students make smart academic and economic choices as they plan for their futures.According to the organization, "Junior Achievement’s programs – in the core content areas of work readiness, entrepreneurship and financial literacy – ignite the spark in young people to experience and realize the opportunities and realities of work and life in the 21st century."JA began in 1919 with a focus on younger students, but shifted focus to after-school programs for high-schoolers who were encouraged to start student-run businesses with guidance from volunteer business advisors in the community.However, JA expanded its reach to include younger children in financial education in the 1970s.Project Business, a program aimed at teaching business concepts to middle-schoolers during in-classroom sessions, and Business Basics, a program for elementary school children taught by volunteers from the high school programs, were introduced. By the 1990s, JA had developed in-school programs for grades K-12 in the United States.JA’s international expansion began in the 1950s with the opening of an office in Canada, followed by the first overseas Junior Achievement-affiliated organization, Young Enterprise (YE), in the United Kingdom in the 1960s. JA Worldwide currently provides volunteer-run programs in countries throughout the world."Today, JA is pushing the education envelope with the implementation of blended-learning, augmented reality and project-based programs," according to a company statement.Current programs include simulations in which elementary and middle school students have the opportunity to test out making adult financial decisions or manage a town.In addition, high school students have opportunities through JA to shadow professionals on the job in a variety of fields.Visit JA.org to get more information about the programs, to donate, or to volunteer.