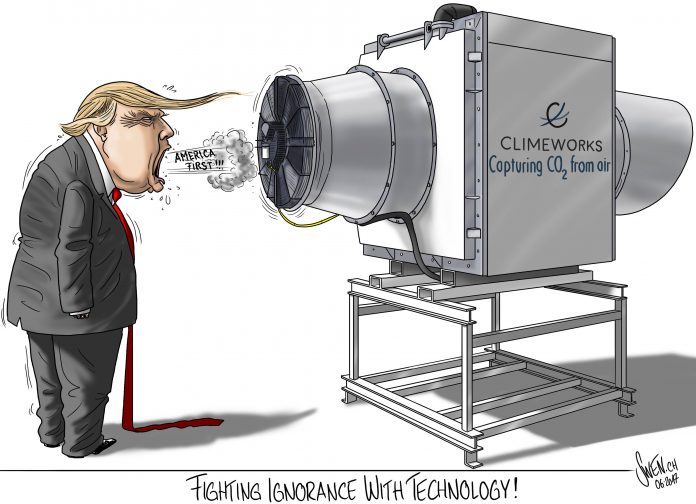 – One day before President Donald Trump announced his decision to pull the USA out of the Paris Agreement, Climeworks, an innovative Swiss startup, launched the world’s first commercial carbon capture plant in Hinwil, Switzerland. The plant, which filters carbon dioxide directly out of the air, offers a solution in the fight against climate change. Climeworks, which invented and developed a novel CO2 filtering material, aims to remove 1 percent of CO2 global emissions from the air by 2025. business campaigning Ltd., a Swiss campaigning firm with the motto “meaningful campaigns for meaningful ideas” was “dismayed by Trump’s decision, but buoyed with hope after seeing the launch of this potentially climate-saving technology,” made the decision to launch the Planet First campaign to remove 100 tons of CO2 from the atmosphere and store it safely underground. The business campaigning team believe that technology now enables ordinary people to collectively make a difference in the fight against climate change, no longer needing to rely on governments to fight it on their behalf. The filtered CO2 can either be stored safely underground, used as a raw material in the food and beverage industry, or to manufacture carbon-neutral synthetic fuels, which can be used in the auto industry. The Planet First campaign will fund the removal of 100 tons of CO2 from the air in support of Climeworks’ goal in the fight against climate change. “We want to make a mark with this campaign. Through technologies, such as Climeworks,’climate protection can become a viable business model,” explains business campaigning Ltd., owner and CEO Peter Metzinger. “The filter plants in Switzerland can evolve into a global export industry and create a new economic sector — the circular carbon economy. Startups and companies can deliver decisive impetus to truly sustainable climate protection, utilizing CO2 as a raw material and reducing the reliance on fossil fuels. This is how we can fight climate change,” says Metzinger. The Planet First crowdfunding page is www.wemakeit.com/projects/let-s-remove-100-tons-co2. For further information, visit www.planetfirst.earth.
NewsUSA Environment

BookTrib’s Bites: Captivating Stories and a Bit of Self-Help

Why Eco-Warriors Will Love or Hate You, Depending On Where Your Hair is Done

The Future of Manufacturing is Local