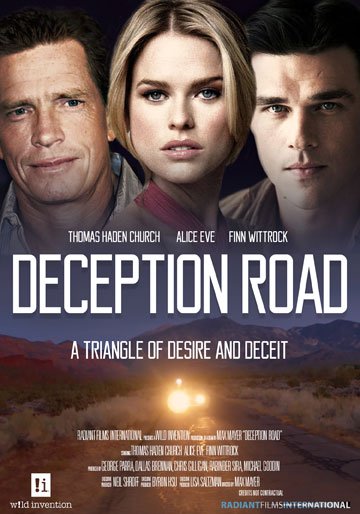 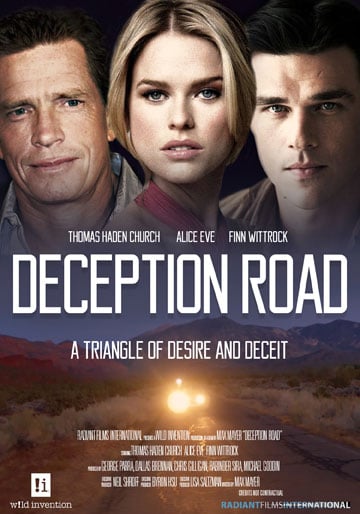 – What do you get when you combine the acting chops of Thomas Haden Church (Sideways, Spiderman 3, Divorce), Alice Eve (Before We Go, She’s Out of My League), and Finn Wittrock (La La Land,The Big Short, Unbroken, American Horror Story) with a twisted tale of deceit, passion, and dark humor?Deception Road, an upcoming film set for production in the summer of 2019.The story gets rolling when the character of Oscar (Wittrock) is traveling through the American Southwest. He hitches a ride with haunted war veteran Hal (Church), but all is not as it seems, and a simple car ride is only the beginning of a complex and mysterious journey. Instead, Oscar finds himself in the middle of a game of cat and mouse with Hal, his lovely, young wife, Jessie, and the situation goes from bizarre to dangerous, but with a dose of dark comedy. The cast is rounded out by newcomer Jack Tynan.The film is being produced by Wild Invention Pictures along with George Parra and Michael Goodin. It will be shot on location in Utah, where the stark, stunning landscape serves as an ideal background for the mystery and danger that unfold. The screenplay was written by Dallas Mitchell Brennan and and the film will be directed by Max Mayer, whose credits include Adam and As Cool as I Am."I look forward with great joy to working with such a dynamically gifted team to tell a story I find so darkly funny, compelling, and emotionally truthful," says Mayer.The film will be distributed domestically by Smith Global Media, headed by CEO Harry Smith."The Smith Global team is excited to have acquired the domestic distribution rights to Deception Road. This quirky thriller will entertain diverse audiences and the wonderful cast is bound to deliver exceptional performances," says Smith.The film is financed by executive producer Neil Shroff and has an excellent shot at artistic and commercial success based on its combination of stellar acting and tight plot. Early analytics suggest that it will be popular with a large range of audiences, which makes the film a great opportunity for investors.Investment opportunities are available at deceptionroadmovie.com."We are excited to bring this film from script to screen as it has the potential to become an enduring classic working with Max Mayer and this talented production team and cast," says Brennan.Visit deceptionroadmovie.com for more information about the movie, the production team, and investment opportunities.

How to Stream the Tokyo Olympics on Peacock