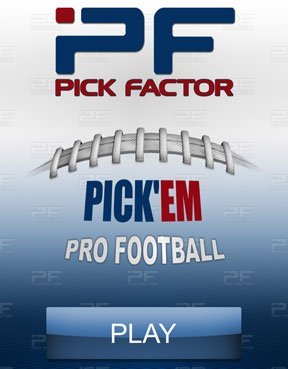 – Sponsored News – There are few topics that cause as much heated debate and passion as sports — especially football. And in this digital age, mobile technology only enables such zeal — which is probably why sports apps are arguably one of the most popular ways to keep up with a beloved team, as well as help diehard football fans decide who will win a matchup on any given Sunday.Consider this: according to the NFL, 70 percent of fans use a second screen while watching football, use apps to allow for easy access to player stats and analysis, and keep in touch with other fans who are watching the game.1One company that is making itself known as the premier place to go for NFL predictions is Pick Factor (www.pickfactor.com). Why? Because it helps gridiron enthusiasts by analyzing thousands of predictions from top sports websites, blogs, radio, and newspapers such as ESPN, Fox Sports, and CBS Sports, finally coming to a consensus prediction for every game.Think you can pick like a pro? Now Pick Factor has launched its new Pick ’em app that allows everyone to test their own predictions. The app not only helps those entrenched in football warfare (be it recreational, an office pool, or various leagues), but now users can also create their own leagues with friends or compete in public leagues.Jim Omer, president of Pick Factor, says that retired NFL players and sports bars have partnered with the company to create their own leagues in order to have their "own game experience.""Famous athletes and businesses are constantly looking for new ways to engage their fans and consumers. This is a way for them to do that," Omer says."I like to think of it as an innovative sports app that’s fun for football fans, and provides our partners with a unique way to promote themselves."For more information, visit www.pickfactor.com or Jim Omer at [email protected].
NewsUSA Internet

How to Navigate Hard Drive Recovery

How to Protect Yourself From Cyber Attacks