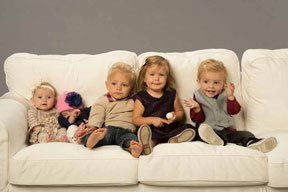 – Sponsored News – What is it about families and reality TV that have us tuning in on a regular basis? Is it watching a family dynamic unfold? Is it the drama? Whatever it is, UP TV’s “Bringing Up Bates” has families hooked. The series stars the Tennessee-based Bates Family, Gil and Kelly Jo, and their 19 children. Over the course of four seasons, viewers have watched the Bates family experience the joys of marriage proposals to health scares to baby showers, as this ever-growing family continues to navigate life’s triumphs and challenges. Matriarch Kelly Jo has brought up the Bateses a certain way, but viewers have followed Erin Paine, Whitney Bates and Alyssa Webster in their journey through motherhood as they navigate their own way of parenting. In the final episodes this season, fans will see the much-anticipated arrivals of the two newest Bates grandbabies. For Erin, who has a new lullaby piano album coming out soon, growing up in a large family as one of the older children helped her to learn responsibility at an early age. This, she says, has translated to her everyday life. “Having a little one that comes running to you for comfort, love, and affection, in addition to giving it, is a priceless treasure,” she says. Whitney Bates, youngest of the three new moms, admits that as a young mother, she has a lot to learn, but relishes the time she gets to spend with Bradley and Kaci Lynn. “Being a mother to me means investing in my children’s lives and getting to love them more than you ever imagined was even possible.” For an only child, marrying into a family of 19 can be a bit of a culture shock, but Whitney says at the end of the day, watching the Bates’ interact with one another helped prepare her for motherhood. “When little problems, loud noises, inconveniences or arguments come up, they [the Bates] learned to work through them,” she says. As for Alyssa, motherhood, she says, has definitely taken her by surprise. “I don’t think anyone can ever fully prepare themselves for it [motherhood], but growing up with so many younger siblings was like taking a beginner course on parenting times 10!” Currently expecting her second child, Alyssa says she hopes to raise a generation that has “character and shows kindness to others,” while accepting the inherent challenges that come with being a parent. “Motherhood is one of the greatest blessings I have ever experienced,” she says, “but it requires a lot of dedication and patience.” “Bringing Up Bates” airs Thursdays at 9 pm ET on the family-focused network, UP TV. For more information, please visit www.uptv.com.
NewsUSA Entertaining