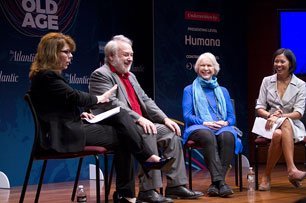 – Sponsored News – As Americans age, one element seems to be key for their mental and physical health: optimism. That’s the finding suggested by a new Humana survey, which asked Americans age 60 and over how they perceive the importance of various wellness traits. Although the survey uncovered many perspectives, the findings about optimism suggest a possible link between a “glass half full” mentality and mental and physical health: * Older Americans who rated themselves as very optimistic about aging tended to be the most active physically, socially and in their communities. * They also reported a much lower number of physically unhealthy days per month on average: 2.84 for the most optimistic, compared to 12.55 physically unhealthy days for the least optimistic * The most optimistic also felt on average 12 years younger than their actual age (those who are least optimistic felt on average 7 years older than their actual age). The survey also asked respondents to rate how they feel about the depiction of people age 60 and over in pop culture: in film, television, commercials and so on. Overwhelmingly, the respondents perceived these media portrayals of their own demographic as inaccurate, rating the accuracy level as, on average, 5 or less on a 10-point scale. Those aging Americans who do feel that media accurately portrays them think about aging more than the average and have a higher level of fear about aging than their peers. Humana also recently partnered with The University of Southern California (USC) to take a first-ever look into society’s views of aging in America through the lens of film. The USC study reveals that characters aged 60 and over are underrepresented in film, and that those characters who do appear face demeaning or ageist references. Key findings from the study include: * Just 11 percent of characters evaluated were aged 60 and over; U.S. Census data shows that 18.5 percent of the population is aged 60 and over. * Out of 57 films that featured a leading or supporting senior character, 30 featured ageist comments — that’s more than half of the films. Quotes included characters being called “a relic,” “a frail old woman” and “a senile old man.” * Only 29.1 percent of on-screen characters engaged with technology, whereas 84 percent of aging Americans report that they use the internet weekly. Taken together, these findings feed into growing evidence that suggest that ageism is a social determinant of health and may negatively impact health outcomes for aging Americans. Societal views and negative media portrayals can cause aging Americans to feel invisible. These negative perceptions may dampen optimistic outlooks and impact physical and emotional health. Humana wants to help aging Americans defy stereotypes, age with optimism and take steps to achieve their best health. To learn more about Humana’s commitment to healthy aging, visit StartWithHealthy.Humana.com.
NewsUSA Seniors

Key Questions to Help You Choose a Medicare Plan

Ways to Stay Connected (And Check On Seniors) While Social Distancing

Addressing The Health Needs of The Whole Person